The Ways We Win
Trump doesn’t like how we sell milk. Tough!

Henk and Bettina Schuurman: ready to take to the road

Bettina, 55, was killed July 9 when a semi-trailer hit her John Deere 6430 tractor on a rural stretch of highway between Saskatoon and Langham, Saskatchewan. Her husband Henk survived.

Bettina and Henk were on a mission. They wanted to raise awareness and support for the supply management of milk. They planned to drive the 4,300 km from their dairy farm in Elmira, Ontario to Vancouver on their 40 kph tractor. It would be a bold adventure to bolster Canadian commitment to supply management. Sixteen days into the trip Bettina was dead.

Trade talks put them on the road

Bettina and Henk fixed a giant plastic cow, nicknamed Maple, to the back of their tractor, along with a sign that read: “Honk to support quality milk produced by Canadian farm families.”

The couple said they would camp and stay with other farmers along the way. “We are looking forward to seeing the country,” Henk said in an interview the day the couple left Elmira.

Bettina and Henk had created a good life for themselves as dairy farmers in Elmira. They needed supply management to keep it that way. It’s the same for all our egg and chicken farmers. But, current trade talks have put supply management on the table and under threat. 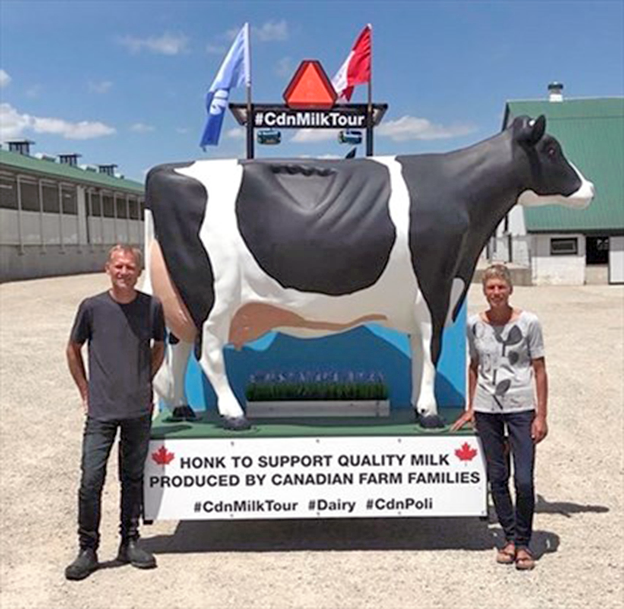 Henk and Bettina Schuurman with their tractor in Elmira, Ontario

Supply management has three big things going for it: it’s Canadian made; it works for farmers and consumers and...Donald Trump hates it.

Yet, talk of supply management is a conversation stopper. Few of us know what it is. Fewer still want to listen to talk about it. So, we are generally ready to let it go. This is unfortunate.

Supply management is important in practice and in principle.

Consumers get a steady supply of safe and affordable food. Thousands of farmers get to make a decent living from farming.

In principle: it gives everyday people (milk, egg and chicken farmers) a way to break free of the dictates of the not-so-free market system.

Doesn’t cost us a thing

Federal government direct subsidies to farmers were once common in Canada. But a crisis of agricultural overproduction in the 1960s made such subsidies too high to bear. Supply management offered a way for the government to help farmers without asking the rest of us to foot the bill.

Under supply management, a national marketing agency, mostly made up of farmers, determines production amounts for each commodity and then sets production quotas for each province.

In order to sell their products, a farmer must hold a quota (basically a license to produce up to a set amount.) The quota system prevents market gluts that would cause prices to dip and disrupt farm incomes.

As of 2015, there were just over 16,000 quota holders in Canada—most of them dairy farmers in Ontario and Quebec.

It’s this policy in particular that annoys Trump, who has said the policy is unfair to American farmers.

In fact, overproduction is the main source of the financial problems plaguing dairy operations in the USA.

Persistent overproduction drives farm-gate milk prices far below the cost of production and more and more American dairy farmers into insolvency. Recently, a surge in dairy-farmer suicides caused national alarm in the USA, drawing attention to what the New York Times called “the widespread hopelessness afflicting the industry”

Bruce Muirhead is a historian at the University of Waterloo who has written extensively about supply management. He told CBC News that while U.S. President Donald Trump has pushed Canada to dismantle our supply management system, many dairy farmers in the USA envy what our farmers have.

Muirhead said Wisconsin farmers in particular are beset by production issues that have caused prices to tank; the state has more cows than all of Canada and produces more milk.

“Those guys are massively in favour of supply management. It would stabilize their industry,” he said.

Canada leaves about 10 per cent of our domestic dairy market open to foreign imports.

The United States gives foreign dairy products access to only 2.75 per cent of its domestic market. Europe offers just 0.5 per cent access for foreign poultry.

In 2016, Canada imported dairy products from the US worth five times more than the small amount it exported there.

Trump has it all wrong once more. But that doesn’t mean he won’t bully his way to what he wants. It is the fear that he might that cost Bettina and Henk Schuurman so much. That alone should give us all reason enough to support and defend our supply management system.