RICHARD SOLOMON IS A HERO TODAY. He is also living proof of the value of a strong public service.

Exhausted firefighters take a break from battling BC forest fires

RICHARD SOLOMON IS A HERO TODAY. He is also living proof of the value of a strong public service.

Richard is on the government payroll. He works for the Ontario Ministry of Natural Resources and Forestry (MNRF). He is one of hundreds of firefighters deep in the Ontario woods doing the exhausting, dirty and dangerous work needed to extinguish raging forest fires in Ontario—fighting to save homes and keep people safe.

That’s not a reality conservatives like. They prefer their own make-believe reality of a public service that they like to say “costs too much and delivers too little.” Richard and his fellow members of Ontario Public Service Union (OPSEU) Local 623 do not live or work in that kind of reality. Their job is public service: regardless of risk or reward. And they are good at it.

Richard’s crew worked 19 days in a row in early July, with only a two day break, before returning to fight the fire. The firefighters live in tents in forest camps, far from their homes and families. The forests are infested with bugs, the smoke and heat is inescapable.

“We work four per crew,” says Richard. “We go where the fires are, and where we are needed—out to North Bay, Sudbury, then back to Cochrane. The new people team up with the seasoned firefighters and we help each other out.” Crews from Nova Scotia, PEI, Saskatchewan, Alberta and British Columbia have all come to aid the Ontario fight.

No matter how good you think you are there’s always a risk, says Richard. “We knock down the fire by putting water all around it, and then start working inside the fire ASAP so it doesn’t jump above the water. But the wind can come out of nowhere.”

“Everything switches with the wind. It just takes you by surprise, and you never know.”

“Safety is number one. We all work together’” says Len Sedore. He is part of a close-knit team in the Sudbury area, including firefighters as well as IT, engineers, pilots, and warehouse and administrative staff.

“All hands are on deck, and we are working flat out,” says Sedore. “Helicopters and water-bombers are doing missions all day long. We are working around the clock bringing clothes, food and resources to the firefighters out in the field.”

“These are true heroes,” says OPSEU President, Warren (Smokey) Thomas. “They make us all proud.”

“The bravery and commitment of these OPSEU members is extraordinary. They are putting their own lives and safety at risk, so that our communities are safe from the dangerous flames and smoke. I could not be more proud of these workers on the front lines as they continue to face down the fires and protect our province.” 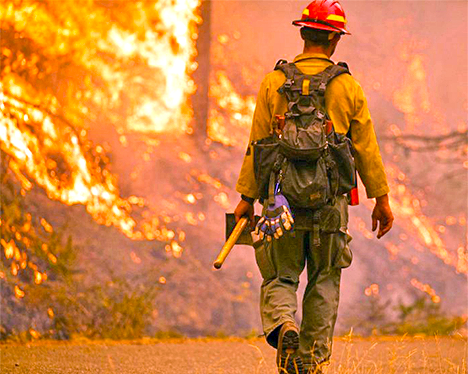 The successful efforts of firefighting crews are evident all over the province. In Henvey Inlet First Nation near Parry Sound, for example, their efforts allowed residents to start making their way back home August 8.

Angele Dubois is one of almost 200 people the fires forced out of the community, in mid-July. She says she’s just happy to be able to return home.

“I just have a whole new appreciation for day-to-day life there, the nature that surrounds us, the community itself, all the structures, the buildings, the services we have,” she said.

Dubois also gave her thanks to ministry firefighters and local officials for “coordinating all of this and making sure everyone was safe.”

As of August 14 there were 5,915 forest fires burning in Canada—at least 50 in every province and territory except PEI. BC, Alberta and Ontario each had over 1000 active fires.

Dedicated and brave public service workers are on the front line working long and hard to extinguish every single one of those fires. Something to remember the next time someone starts huffing and puffing about a make-believe public service that is supposed to “cost too much and deliver too little.”